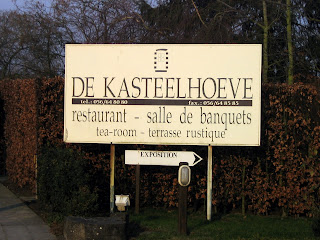 It was two beer festivals in two days for me. A bit greedy yes, but why not? The Alvinne microbrewery's festival (ACBF) takes place on the Friday before the larger festival organised by Zythos, the Belgian equivalent of CAMRA. This year the brewery felt confident enough to introduce a second day in direct competition with Zythos. 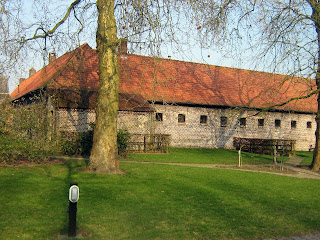 The festival was held in an old farmhouse complex that was now used for hospitality and banqueting. A good description would be 'In the middle of nowhere'. This being Belgium transport had been considered with a shuttle coach service to and from Kortrijk railway station. Coach and entrance tickets could be purchased in advance on the Internet. A hall  with an ancient open timbered roof plus a pleasant courtyard and adjacent restaurant building contributed to a superb rustic setting on a beautifully sunny day. A small open air swimming pool would no doubt not escape unscathed at a British bash awash with strong beer but there was no problem here.

Belgium can be slightly introspective when it comes to beer festivals. In a small country with at least 500 different beers that's no surprise. ACBF is refreshingly different. Not only does the host brewery display it's own eclectic range of brews, there were also another 18 brewers from the Northern Hemisphere exhibiting their expertise in brewing. 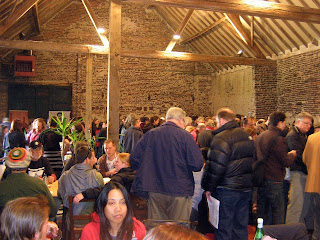 Old friends Struise were the only other representatives from Belgium. De Molen and Emelisse made the short drive from the Netherlands. Others came from further away. Norrebro, Crooked Moon, Mikkeller and Fano from Denmark, Ganstaller, Braustelle and Freigeist from Germany and BFM from Switzerland. The expanding beer culture of Italy had Del Ducato and Revelation Cat. Stillwater crossed the pond from U.S.A. and Grassroots are part Danish part American I think. Finally, Thornbridge were proud representatives from Britain. There was the added bonus of beers from the cherished lambic blenders Drie Fonteinen.

Over 100 beers in many styles and strengths. IPAs, Porters, Rauchbiers, Bocks, oak-aged beers with the weakest 3.5% and the strongest that I saw a whopping 26.0% barrel-aged Imperial Stout from Struise. 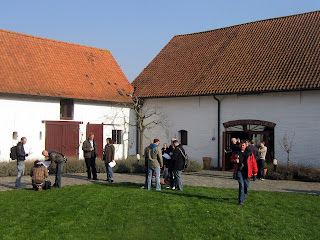 There were plates of cheese and meat plus crisps on sale in the main hall. The restaurant building had soup, stew and salads to sustain the drinkers with tables providing a chance to relax from the action. A beer shop had an amazing choice even if some of prices were eye watering.
﻿﻿ ﻿﻿ It was good to see how friendly the brewers were, all willing to talk at length about their beers and obviously please to be part of the event. Highly recommended.
Posted by Birkonian at 19:37