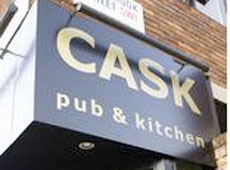 Cask Pub & Kitchen licensee Martin Hayes is spreading his wings by opening a second specialist beer bar. The former 'Clockhouse' in Clerkenwell will open in June with a huge range of craft beers.

“It will be the largest selection ever seen in the UK with 16 handpumps for British ales, 21 international beers on keg, and around 300 bottled beers,” said Hayes.
Posted by Birkonian at 20:30