A quick trawl of the Internet for Cartmel and you'll find words like historic, unique, charming, beautiful, picturesque and tranquil. Personally, I think a better description would be 'beery'.

Amazingly for a village with about 1,000 residents there are five pubs, all selling cask beer. Four pubs are longstanding features of the village with newly opened premises which has more in common with a restaurant/wine bar than a traditional pub. Nothing in the area from Stringers or HardKnott though. Maybe the esteeemed brewers can advise me. 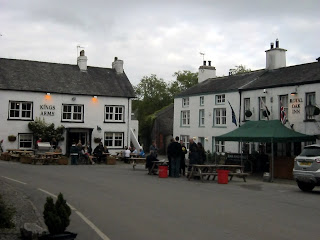 Two pubs stand at 90º to each other in a corner of the village square. Backing onto the river Eea the Kings Arms has recently re-opened after the premature death of the previous licensee. It has been refurbished at some cost with the 70's seating, carpeting and horse brasses swept away and replaced with a new stone floor and a less cluttered feel. Hawkshead Bitter is the sole offering at the moment, but is selling fast and more beers will be added as the new owners find their feet.

The Royal Oak stands proudly towards the middle of the square. It is more like the perception of an old village pub with low ceilings and exposed beams. There is an extensive, sunny garden leading down to the river. The beer range consists of Coniston Bluebird and Skiddaw. A third beer is often offered. The garden is the venue for a beer festival in August. 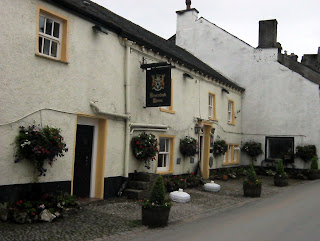 All of sixty seconds walk round the corner and under the gatehouse arch and you come to the Cavendish Arms. The Lord Cavendish owns an extensive portfolio of land including his estate at Holker Hall and Cartmel racecourse. The Cavendish is an historic coaching Inn and still retains a rather superior atmosphere. There is a restaurant in one room and the beer range comprises Corby Ale, Theakston's Bitter, Deuchar's IPA and Cumberland Ale. At this point I'll mention the very upmarket L'Enclume restaurant nearby. The prices reflect the status conferred by a Michelin Star. I presume that no decent beer is stocked. Even if it was I probably couldn't afford it. 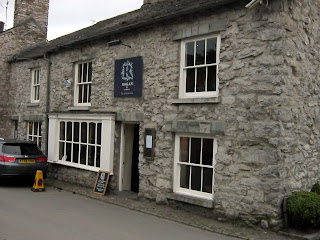 Double back through the square, walking over the bridge past the Kings for a lung busting twenty yards and you will encounter Rogan's. Under the same ownership as L'Enclume this was viewed as a cuckoo in the nest when it obtained its license in what is an over pubbed village. Anyway, it's here to stay as a pleasant, upmarket restaurant-cum-wine bar. Two beers, Lonesome Pine and the dreadfully named Laughing Gravy, are stocked from the Ulverston brewery.
﻿ 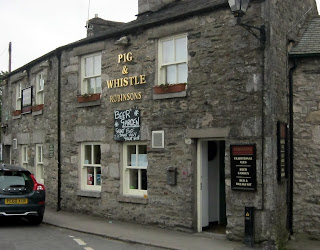 You'll need your walking gear to reach the final pub. It is at least five minutes walk past the historic Priory before the Pig & Whistle is reached. This tiny village pub is the haunt of locals and has a cosy outside, raised drinking area which overlooks fields. The excellent Hartley's beers are now a fading memory so the drinker must make do with up to three beers from the Robinson's range. 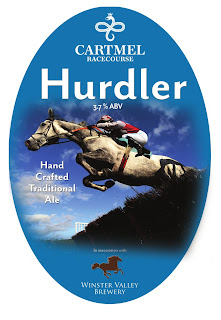 Should you be visiting the village for the unique experience that is Cartmel races then the choice of beers has increased this year. The racecourse has commissioned its own beer, Cartmel Hurdler, from the local Winster Valley Brewery. The beer is available on handpumps in the course bars and the brewery offers its other beers in a beer tent in the centre of the course.

All the pubs serve meals and the Cavendish, Royal Oak and Pig & Whistle offer accommodation. Cark railway station is reached by a pleasant 2 mile walk along a woodland path. Bus service 532 to/from Grange-over-Sands serves the village on weekdays.
Posted by Birkonian at 18:24