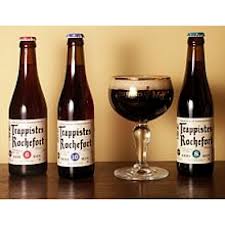 It would be a great shame if the Rochefort beers were affected. Co-incidentally I drank a bottle of Rochefort 10 last night; a sumptuous end to an evening. Belgian beers have taken a back seat recently behind the juggernaut of heavily hopped beers, but I am a big fan and consider a Trappist or Abbey style beer to be the perfect accompaniment to cheese. Traditional gueuze is an acquired taste they say - well I acquired it many years ago and find it the most refreshing beer on those rare summery days.
Posted by Birkonian at 21:16