What's in a name?

Since the first wave of guest microbrewery beers surfaced ever more exotic names have appeared on pump clips and bottles.
Hilarious names have abounded such as Dog’s Bollocks and Old Fart. Hilarious if you have an I.Q. of under 80 that is or went to a public school. Or both. Puns like 'Quacker Jack' or 'Hung, Drawn 'n' Portered'. Forgive me while I split my sides.
As brewers endeavoured to produce ever more special and interesting brews, i.e stronger and more expensive, they have attempted to come up with names with suitable gravitas. No, I wasn’t thinking of Brewdog. Fuller’s Vintage Ale and Brewers Reserve spring to mind. Some are given obscure names to add an aura of mystery. Ola Dubh may not be obscure to Gaelic speakers but it's all Greek to the rest of us. 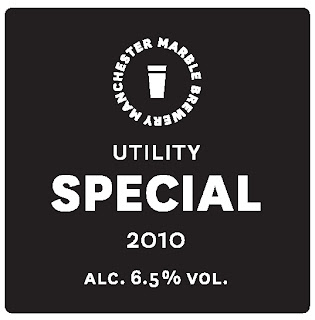 I was thinking of beer names earlier this week while enjoying numerous excellent pints in the Marble Arch, . Marble have gained a reputation for high quality draught beers and a range of classy brews presented in 75cl champagne corked bottles. So why the name Utility Special 2010? Dominic Driscoll told me that Marble's original end of year 2010 special ended in failure when the Duvel yeast expired part way through the brew. So they quickly commenced brewing a replacement, presumably using a pre-existing recipe. This utility beer is now on sale in draught form and in bottles. Simple!
Posted by Birkonian at 18:29