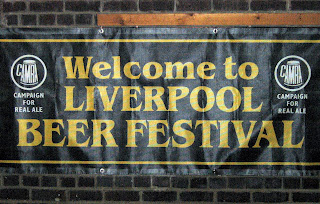 The CAMRA Liverpool Beer Festival is hugely popular and I've already said how difficult it is to obtain a ticket. The venue is superb. It's the crypt of the Metropolitan (R.C.) Cathedral which was built before the 2nd World War as the first stage of a project to build a grand traditional cathedral to match the Anglican edifice at the other end of Hope Street. The was intervened and plans were scaled back with designs for an ultra- modern glass and steel building taking its place. 'Paddys Wigwam' was controversial and unloved at first but is now accepted affectionately as an integral part of the Liverpool skyline.

All stonework and Gothic arches it's a great place to drink beer with seating in the main hall for those who arrive early. There seems to be simplicity in planning the beer order. Quality is the watchword rather than rarity with 200 of the countries finest brews on sale. That's a lot of different beers for a mid-sized festival which means some have sold out by the final day. Liverpool has a number of great pubs, many of which have taken the opportunity to piggy back their own festivals onto this weekend to offer the drinker even more choice.

The beers themselves are excellent. Most are £1.00 per half/£2.00 per pint even up to and above 5% with only the real rocket fuel brews at £1.50 per half which is still good value. Local breweries get pride of place near to the entrance with 17 of them represented. I obviously sampled the offerings from the wonderful Brimstage Brewery first just to check that they were as good as ever (they were). Their Rhode Island Red must be a winner one day soon at Earl's Court. 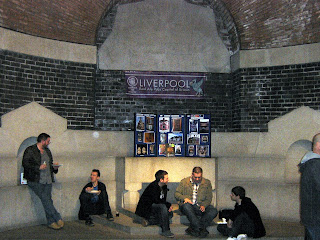 Those 'flavours of the month' Brewdog, Thornbridge and Marble were well represented. I have to say that on this occasion I found the Punk IPA to be overpowering, all sweetness and grapefruit. I was much happier with Dark Star's more modest Hophead.

Marble's Manchester Bitter and Ginger went down well but again I felt the Dobber was a little sweet. Maybe these strong hoppy beers are better with the sharpness of keg !! The new Galaxia from Thornbridge suited my palate better. The citrus notes balanced by good bitterness. This one uses Australian hops.

I'd drank a number of hoppy beers in the first few hours do it was time for a change of tack. Sarah Hughes Ruby is always a winner and I was recommended Liverpool Organic's Russian Imperial Stout. The tasting notes state Liquorice, Dark Chocolate and Coffee. Decadence in a glass indeed. This is a top class brewery with a fine range of cask and bottle conditioned beers. Their version of the much missed Higson's Bitter caused a lot of interest but it's a difficult taks to match that pungent, bitter, headache inducing brew. 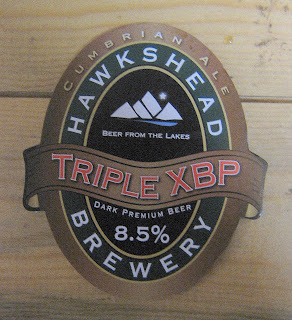 ﻿
One rare that was available was Hawkshead Tripel XBP. I cleansed my palate first with a glass of their Bitter which is one of my favourite beers  but the XBP was a disappointment. A strong and dry old ale there was no distinctive flavour evident. I'd even say it was bland despite the strength.

Good food is on offer too. The Everyman Bistro provide upmarket fast food and there is also a pie and pasty stall and a huge range of farmhouse cheeses with bread. Ideal ballast for a beer festival.

A justifiably popular festival and a good excuse to spend a weekend in Liverpool. After all if you can't get a ticket for each session there are plenty of good pubs.
Posted by Birkonian at 18:13