"MERSEYSIDE is set to lead the way by introducing a minimum alcohol price tag.
The proposed 50p per unit cost is intended to stop supermarkets selling cheap booze as loss-leaders fuelling binge drinking amongst local youngsters.
The move will be included in a report published next month by the Liverpool City Region Child Poverty and Life Chances Commission which represents the five councils and associated bodies.
Former welfare minister and poverty tsar Frank Field told the ECHO today: “Increasingly in many of our constituencies alcohol is a bigger social problem than drugs – particularly amongst young people.”
The Birkenhead MP added: “It is outrageous that big supermarket chains exploit the situation, selling alcohol below cost to draw in customers and increase their profits.”
The leaked report pointed out across Merseyside alcohol-related hospital admissions of under-18s is 149 per 100,000 of population – well over double the 64.5 national average.
Research by academics suggests a 50p minimum price would reduce such admissions by 4,355 in the first year in the Merseyside and Cheshire health area. And it would cut regional NHS costs by £2.1m each year.
The report said: “Increases in price would not impact equally across all drinkers because those who drink hazardously and harmfully tend to choose cheaper drinks.
“A 50p minimum price would lead to consumption of low-risk drinkers falling by only 3.5%. Therefore minimum pricing would affect harmful drinkers far more than those who drink in moderation.”
Under the proposal, which will require new local bylaws, a two-litre bottle of supermarket brand cider currently sold for £1.85 would cost £5.30.
The current supermarket cost of cheap drink can be as low as 17p a unit.
Last year the Home Office confirmed retailers will be banned from selling alcohol below the rate of duty plus VAT.
But the Merseyside report pointed out such curbs will still allow supermarket chains to set unit prices as low as 21p for beer and 28p for spirits which works out at 38p for a can of lager and £10.71 for a litre of vodka."

I presume that Tesco et al are pretty robust in not selling alcohol to under 18s so blaming the low price of booze in supermarkets for a rise in alcohol-related hospital admissions in this age group seems grossly wrong. This is where the Law of Unintended Consequences which Tandleman is fond of quoting kicks in. Instead of learning how to drink responsibly in a pub atmosphere under pain of sufferance by the Licensee and pub regulars, this generation of teenagers get older youths to buy their alcohol or at the mercy of criminals offering supplies that have avoided duty and tax. Drinking in their homes or in parks, there is no regulation of the binge drinking that ensues.

The minimum pricing will not solve the problem. Merseyside has many 'entrepreneurs' who can undercut the higher price levels that the supermarkets will be forced to commit to. With no social conscience the under age drinkers will continue to be exploited with a few older and poorer drinkers tempted as well.

Will any increased tax revenue from the off-trade be used to help the heavily regulated on-trade? Not likely! Note that there is no apology for the consumption of low-risk drinkers reducing by only 3.5%. Why should this blameless group be penalised?
Posted by Birkonian at 20:43 1 comments

I spent three nights in Bournemouth last week. It was a mixture of business and watching Tranmere Rovers which certainly wasn't pleasurable. Of course, I spent plenty of time in pubs but I found the drinking experience a little disappointing. I visited six GBG pubs, three in Bournemouth and three in Poole which adjoins its neighbour seamlessly. I also tried two Wetherspoons. I'm pretty brave you know.

Beer quality was good apart from the 'Spoons in Boscombe, with the Bermuda Triangle in Lower Parkstone setting an excellent standard. It wasn't the quality but the beer styles that I had trouble with.

Ringwood and Wadworth dominated, two breweries producing old fashioned malty beers, particularly Ringwood whose beers I always find too sweet. There was a distinct lack of  hops and beers from micros. Nottingham, Orkney, Tirrell, even Robinson's Build a Rocket Boys! could be found but nothing resembling a hoppy bitter or IPA. The only beer I found from a small brewery was from the Dorset Brewing Co., Dorchester which didn't impress me this time or previously.

There was no vibrant pub selling craft beers and unusually for such a large population centre there seems to be a lack of good cask beer venues.

Paul Scholes: The secret of his success? 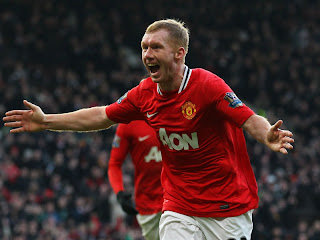 According to one of the weekend papers Paul Scholes has given up his slippers and his favourite pint of John Willie Lees Bitter to return to playing for Manchester United.

So drink good no nonsense real ale from a traditional family brewery and you too can be a footballing legend.
Posted by Birkonian at 00:01 0 comments

I've heard a very strong rumour that Hydes are to vacate their brewery site in Moss Side, Manchester and downsize to new premises. They have reached agreement to relinquish their free trade accounts to Thwaites and will concentrate on their tied estate.

Hydes had invested in greater capacity some years back when they won the contract to brew Boddington's Bitter after the closure of Strangeways Brewery. I could probably satisfy the current demand for Boddington's with a home brew kit so the extra capacity must have become a drain on finances. Hydes may be well-respected but have struggled in the cut-throat guest beer market and their brewery is not valuable as a redevelopment site. A good business move or last throw of the dice?
Posted by Birkonian at 23:18 2 comments

I was in Belgium leading up to New Year and it was as wonderful as ever. This piece isn't about my consumption though, rather that of my 14 year old daughter and her friend. In Britain alcohol is tightly regulated on licensed premises. Looking back to my teenage years, wearing long trousers and having a vague idea of what to order was enough to obtain a pint of mild. As the years past, looking over 18 wasn't enough and the latest scheme is the 'Think 25' where it seems that almost anyone under pensionable age has to produce ID.

Belgium is far more relaxed. Our teenagers drank fruit beers with strengths of 3 to 4% in four different bars in three different town/cities during the week and not one barperson so much as raised an eyebrow never mind enquired of their age. Note that it was one beer per day maximum. I am aware of Belgian commentators pronouncing that weak beer is better for school children than fizzy soft drinks such as Coca Cola.

The question I ask is am I and the Belgian bar staff being irresponsible in allowing teenagers to drink beer in a controlled but relaxed environment? Or should Britain follow this lead to discourage the binge drinking by teenagers at home, in parks etc. I knew exactly how to behave in a pub by the age of 16 and education denied to current teenagers.
Posted by Birkonian at 20:43 2 comments