The Wisdom of Roger Protz

The great man has received quite a lot of criticism recently. The criticism is deserved juding by the piece reproduced below from the latest What's Brewing. Referring to Hartley's XB he says:

"If memory serves me well, I recall a darkish bitter with a strong malty character, quite different to the paler and hoppier bitter brewed by Jennings."

Now I never considered Hartleys XB to be darkish but that is a minor point. But Jennings' paler and hoppier? I think that maybe Mr Protz's memory may not be serving him as well as he thinks.
Posted by Birkonian at 15:34 4 comments

Birkenhead has gained another pub selling a range of cask beers. The Avenue was a pub in Claughton, Birkenhead surrounded by terraced housing. It was built by Birkenhead Brewery to their usual template in the 1950s on the site of The Avenue cinema which took a direct hit during a 2nd World War bombing raid. Birkenhead suffered badly from German raids due to its shipyard, industry and proximity to Liverpool. 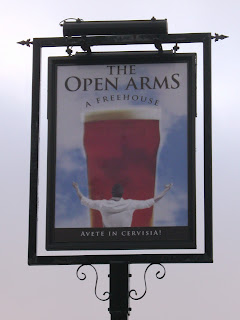 Picked up for a song by the owners of the successful Cock & Pullet, on opening day the beers on offer were Brimstage Trapper's Hat, Liverpool Organic's Cascade, Phoenix Spotland Gold (!) and Thwaites' Wainwright. Observing the customer preference for fizzy lagers and the lack of cask ale heritage in the area it will be interesting to see if cask ale is a success.
Posted by Birkonian at 19:25 14 comments 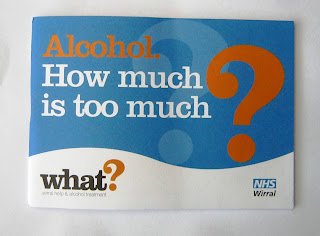 They were bothering fans at the Tranmere game yesterday. As if we didn't have enough to worry about. using the acronym 'What' (Wirral Help & Alcohol Treatment) they were asking people to complete questionnaires which of course told us that we were all 'at risk' from excessive alcohol consumption. They were then handing out costly leaflets and booklets.
I liked the advice which identified when people were most likely to drink or drink too much. They included:
After work

In other words I am at risk whenever I'm not at work or sleeping. I wish Wirral NHS would spend their our money on reducing waiting times for operations or abolishing car parking charges.
Posted by Birkonian at 08:48 3 comments

Meantime reduces strength of beer. Are we surprised?

Meantime IPA has a new label. It also has a new strength, dropping from 7.5% to 7.4% ABV. Not a surprise in view of the new increased duty on strong beers and not in itself cause for great concern. But I'm worried that the 7.5% threshold will be reduced in future years either as a continued attack on drinkers egged on by the health lobby or merely as a blatant tax grab. Either way the emasculation of beer is underway.
Posted by Birkonian at 18:13 3 comments

I was passing through Formby the other day so I popped into Waitrose. We aren't privileged to have one in Wirral so I went in to check out the beer range. I was pleased to find Fuller's Vintage Ale 2011 gracing the shelves so I grabbed a couple. I've already drunk one. Slightly sweet as expected but already a high class ale.

Something else that caught my eye was a range of beers under the 'Curious' name. There was 'IPA' and 'Brew' which is an unpasteurised lager brewed with a champagne yeast. I chose a bottle of Porter because it is bottle conditioned. All are on offer in Waitrose at £1.20 each! A bit of research found the beers to be a collaboration between Chapel Down Winery and the Sussex Brewery. Interesting.
Posted by Birkonian at 19:26 2 comments

Brimstage Brewery was five years old last week. At any one time Trappers' Hat and up to two choices from Sandpiper, Rhode Island Red, Scarecrow and Oystercatcher Stout can be found in the pubs and clubs of Wirral, Liverpool and Chester. In celebration of this landmark all five beers are currently on sale in the Wheatsheaf, Raby, the first time that the full range has been available in a pub at the same time.

Originally one brew a week was produced from the 10 barrel capacity plant, but such has been the demand for the beers that 3 brews a week is now the norm and it won't be long before that output will need to increase. If you've never drunk the beers I'll just say that you are missing out on excellent ales.
Posted by Birkonian at 13:22 3 comments