Following on from my piece about fancy packaging of beer if you aren't aware of ABInbev's festive offering it's pictured below:

So all that's needed to change wife-beater into a desirable craft beer is an embossed, corked bottle with a champagne enclosure. Easy eh?﻿

It sounds so innocent

There's plenty of comment about David Cameron's announcement regarding the minimum pricing of alcohol. Leaving behind the very dubious reasoning for the move, one reason why the backlash won't be huge is the phrase itself. You can here people thinking to themselves " minimum, well that's nearly the same as low, and low pricing sounds o.k." Also, "45p; well I'm paying a lot more than that now for a pint/shot/short so it won't be a problem."

Of course, it will be a problem though because the more savvy of us well realise that a typical alcoholic drink has multiple units of alcohol. No doubt the confusion of what a 'unit' actually is will be exploited by retailers as an explanation for profiteering - "sorry for the price rise, but it's the minimum pricing to blame".

As many of us know it's only the start. Alcoholics don't stop drinking because a bottle of whisky goes up in price by £1.00. So when' statistics' are produced to show that binge drinking is still a problem the health lobby will say that the minimum price per unit is too low and demand a further increase: then another, and another.
Posted by Birkonian at 21:45 1 comments

I saw you coming

Harry Enfield's and Paul Whitehouses's T.V series may not not get the audiences of some years back but still makes some clever observations.

I checked out Shepherd Neame's Generation Ale which had looked interesting. Here's some information from the brewery: 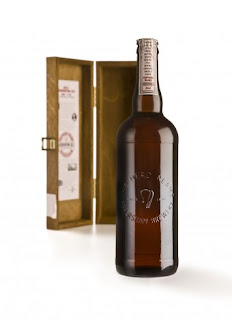 "Generation Ale launched in 2011 as a limited edition ale hand-crafted to commemorate five generations of Shepherd Neame as an independent family brewery.

With only 3,000 bottles released, Generation Ale boasts a 12-month ageing process resulting in a rich, full-bodied ale to be savoured and enjoyed.  Beautifully packaged in a wooden presentation box, Generation is a collectors’ item and the ultimate gift for ale lovers.
Generation Ale is presented in a traditional amber bottle, embossed with the Shepherd Neame crook.  Each bottle is hand-wrapped in paper and encased within a wooden box bearing the signature approval of chief executive Jonathan Neame.  With an ABV of 9% and served in a 75cl bottle, the beer is priced at £17.50 and exclusively available from Shepherd Neame. The perfect ale to sip, share and savour with friends, Generation is the ultimate beer from Britain’s oldest brewer."
The £17.50 doesn't include £5.00 postage!  No recession in Toryland then.

........is the maximum number of drinkers allowed in Port Street Beer House, Manchester. At least that's what the security bod told me as a reaon for leaving me standing on the pavement for five minutes yesterday. Was he telling the truth or being a jobsworth? I've been in any number of pubs much fuller than this was. Or is it because craft beer drinkers need more space to protect or show off their expensive purchases.
Posted by Birkonian at 19:06 4 comments

Wetherspoons are different in Essex

I stayed overnight in Braintree last Saturday. Tranmere were due to play an FA Cup tie on Sunday lunchtime so I'd decided to travel down the day before. It was an expensive trip as the match was postponed an hour before kick off.

Anyway, my Northerner prejudices were demolished as I found it a pleasant town with friendly locals. I drank some excellent beer in Braintree including a Mild (!) and also in Chelmsford. Late evening I was tempted into the local Wetherspoons by their beer festival. A cavernous former cinema I was surprised to find a mixture of Dance and R & B music playing at a high volume. There was also Italian football on numerous screens. Is this a change of tack for Wetherspoons? I've not been in one of their pubs before with loud music playing. I found the juxtaposition of drinking Minagof Pale Ale from Guam while watching the Essex youth singing along to Ne-Yo blasting out from the sound system rather surreal.
Posted by Birkonian at 21:38 3 comments