An article in this week's paper states that a local council in Ireland has approved that the drink driving limit be raised for older drinkers in rural areas on the grounds that they wouldn't be able to go for a drink otherwise presumably because of their reduced mobility.

A councillor said that the country roads are deserted anyway so they wouldn't be much of a danger. The fact that a number of councillors who voted in favour are pub owners is surely not relevant. 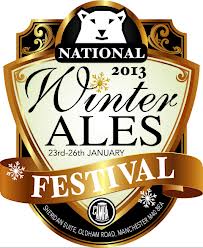 I'm off to Manchester tomorrow after work. It's the last one before it moves to Derby in 2014 - I'm not sure why. I've enjoyed the festival since it moved to the Sheridan Suite even if I find the beer list a bit strange. There seems to be a lot of lesser known beers aimed at tickers and not enough cast iron classics which I like to mix with new beers. For instance, there are four Acorn beers but no Barnsley Bitter. Five from Hawkshead but no Bitter. Where is Thornbridge? I admite bias but where is Brimstage, the must have brewery for real ale pubs in Wirral, just 40 miles away? I'm just being perverse, I'll find plenty to drink. Of course, there's the odd reasonable pub in Manchester city centre. So I've booked two nights in Travelodge do do the festival justice. I might even visit Brewdog Manchester.
Posted by Birkonian at 20:23 2 comments

Not always better at home

I enjoyed my day out in London on Saturday. Wary of the weather, I was up well before dawn to get the earliest possible train. Even with a 40 minute delay I stepped on to Euston concourse at 09:30 and after a quick bite to eat was in the Harp, Chandos Place soon after its opening time of 10:30.

A couple of quick pints from Harvey's and Sambrook were good if expensive to a northern lad at £3.60 and I was off to meet some London friends in Cask, Clerkenwell. I was very impressed with the beers from Redemption and was far from surprised to be told the next day that they have the same brewing consultant, Dave Smith, as my excellent local brewery Brimstage.

Much as I wished to linger the main point of the trip was to watch Tranmere Rovers at Brentford so a train from Vauxhall was required. There was just time for a pint of London Pride from a plastic glass in the Griffin before kick off. The lads 'done well' as they say and three points keep us top of the league. Seven minutes injury time were unwelcome but a supreme effort meant that I made it to Brentford for the 17:00 back to Vauxhall and from there straight on to a tube to Euston. It was now 17:40 and even though my ticket was valid for any train to Chester or Liverpool a quick scan of the delays and cancellations on the destination board made my mind up that I should head north on the first available train.

I just had time for quick pint in the Euston Tap. Marble Draft on the blackboard was a no-brainer for me and it was the right choice. In fact, it was in better condition than I've ever found in the Marble Arch. I don't know if it's because the beers on sale in the Marble are very young. That's a pure guess and I may be wide of the mark. Whatever the reason it contradicts the 'Landlord is better in Yorkshire' and 'Adnams is better in Suffolk' type of comments that we hear so often.
Posted by Birkonian at 22:45 2 comments

An  American friend gave me a can of Sierra Nevada Torpedo Extra IPA recently. In the UK the perceived wisdom that all canned beer is rubbish. Until Brewdog came along no brewery with a reputation to uphold would dream of canning their beer.

USA brewers don't subscribe to this view. Across the pond beer is commonly drunk al fresco, often at sporting events where glass is banned. Americans are happy to pack the cooler with a few cans of their favourite craft beer.

I thought I'd pick up a bottle of Torpedo from my local Tesco and compare it with the canned version to check my prejudices. Visually, there was little between them with the bottled version showing the slightest of yeast hazes. The bottled version also had a slightly hoppy nose whereas the beer from the can was almost odourless. Tasting the two glasses there was little between them. The bottled beer had a little more flavour and a bit more mouth feel. Overall, I preferred the bottled beer but the canned version was quite pleasant and if I didn't know I probably wouldn't have guessed that I was drinking a canned beer.
Posted by Birkonian at 11:27 0 comments

How good is Derby?

Until Saturday I'd only visited the two pubs in Derby closest to the railway station - Alexandra and Brunswick. I'd booked a cheap Travelodge room and was able to make a good effort at sampling some of the best pubs in the City. I was very impressed with the choice, quality and price of beers. £2.70/£2.80 was typical and many of the pubs gave a 20p per pint discount to CAMRA members.

The pubs were well grouped too. Apart from the two mentioned above I visited Wetherspoon's for any early start, then Olde Dolphin, Five Lamps, Flower Pot, Brewery Tap, Silk Mill and the Smithfield and didn't seem to spend much time on foot.

There was a friendly greeting in all the pubs and choosing a favourite wasn't easy but I can see why the Five Lamps was voted Derby CAMRA POTY. A well chosen list of beers - obscure isn't necessarily best with beers from as Acorn, Buxton, Derby, Roosters and Whim for example. I don't really see why the CAMRA Winter Beers Festival is moving to Derby. They've enough good beer as it is.
Posted by Birkonian at 21:15 0 comments 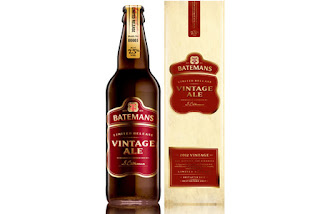 STOP PRESS: I've just noticed that the vertical red flash at the top of the box states 'STICTLY LIMITED RELEASE'. I hope their brewing is better than their spelling.
Posted by Birkonian at 19:19 0 comments