There have been plenty of comments regarding the price of 'craft' beers and the perception that the mark up is excessive.

I was in Port Street Beer House on Sunday and would have been tempted by the X-Mas Zinnebir from the excellent de la Senne brewery in Brussels. However, the blackboard was showing a price of £10/pint! I know it's imported but I've seen plenty of other foreign beers on draught at different location much cheaper than that. I think a lot of Londoners would baulk at that price never mind Mancunians. The beer is 6.5% so it is not rocket fuel. I'll be interested to compare the price of say the 10.5% Gouden Carolus Christmas at the Manchester Velodrome festival next month, granted there will be lower overheads.
Posted by Birkonian at 11:02 4 comments

In Sheffield for the footy yesterday. The Sheffield Tap was the obvious first stop as long as we hide our football shirts. Why is such discrimination allowed? They have no problem with Rugby shirts and allow children in but they view all football fans as sub-normal IQ psychopaths.

That is a niggle but not my main grouse. The bar may have a superb choice of cask, bottled and 'craft' beers and has been extended to provide more seating but there were only two staff  serving a bar that contained about 80 customers. I managed to get served - note that the barmaid wasn't making any attempt to notice who had been waiting the longest - another bugbear is when she said "who is next?" but when my friend went up to get the next round it was obvious that there were dozen punters were waiting to be served because one of barmaids had gone out to collect empties.

The number serving in such a busy pub made Wetherpoons look over-staffed. So we gave up waiting and went to the Devonshire Cat where service was prompt and the cask beers excellent.

I don't think that this was a one-off because I've struggled to be served previously in the Sheffield Tap, so come on, show some consideration for the customer and employ more staff.
Posted by Birkonian at 11:21 2 comments

This is the time of year when the male of the species receives socks, after shave and deodorant. I've no problem with that. However, if you are recognised as liking the odd pint of beer there is a chance that you'll also receive an Inappropriate Beer Gift from a well meaning relative or friend. You force the false smile as you unwrap the Gift pack of 'World' lagers (nanufactured in South Wales and Northampton) or cans of Bombardier/Old Speckled Hen.

Those of us who take pride in a modicum of beer knowledge will be fully stocked with more suitable beers and will wait for a suitable opportunity to jettison the unwanted gifts at a party or pass them on to the less discerning (i.e. non geeky) drinker.

Today, I received a supposed example of the Unwanted Beer Gift, or so I thought. But upon opening I found a gift set of the Maredsous range of Belgian beers complete with beer glass (which I've wanted for years despite owning far too many glasses). I won't embarrass the givers of this excellent and unexpected gift by naming them here but Thank You and Merry Christmas!
Posted by Birkonian at 12:14 6 comments

I've chosen some suitable beers for tonight and Christmas Day. It's a mixture of Belgian Christmas beers, some of which have been aged. For instance Stille Nacht Reserva 2005 which clocks in at a whopping 12%.

I've included the odd English special beer as well. A 75 cl Meantime IPA will offer a nice contrast to the heavier beers and I've also got a few Bateman's Vintage Ales which are good value from Aldi.

I've got plenty of other 75cl bottles for later in the week as long as I've got someone to share them with. It's just greedy drinking a 13% Winterkoninske on your own.

I always have a good of stock of special beers in for Christmas but presumably most people drink the same beers that they do the rest of the year; just more of them.
Posted by Birkonian at 13:28 0 comments 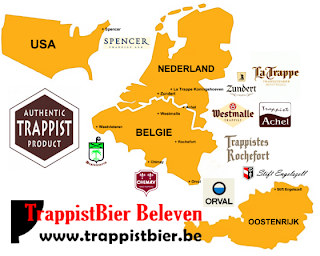 While all Trappist brewers employ secular workers to do most of the work, they must nominate at least one monk to supervise the brewing otherwise their beers will lose the Authorised Trappist Product denomination. At least there are new Abbeys starting to produce beer. Stift Engelszell in Austria (Gregorious), Maria Toevlucht (Zundert) and even St Joseph's Abbey from U.S.A have been granted the ATP logo. Inevitably, beer geeks are paying over the odds to purchase these 'desirable' beers.
Posted by Birkonian at 20:28 0 comments 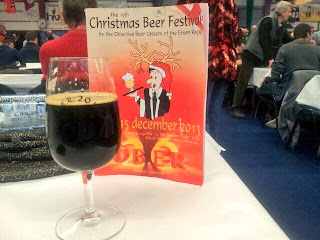 My five days in Belgium flew by. Two nights in the perfect Christmas city, Bruges, an evening with friends from far and wide in bustling Antwerp and then two days at the finest Xmas beer festival in the world set in the unlikely setting of Essen, an otherwise boring dormitory town on the Dutch border. I also put in two shifts behind the bar at the festival, slightly daunting where the pre-requisite is a knowledge of all the numbers in Dutch from one to one hundred and eighty - the number of different beers on sale.

I drank a lot of superb beers and a few rubbish ones too. A few hundred came home in the boot of my car. That's Christmas over for another year in my book. At least I've booked my room in Essen for next year.
Posted by Birkonian at 22:38 1 comments 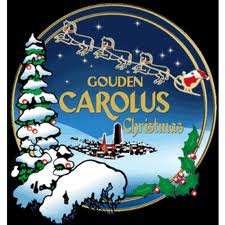 Here in Britain we are pretty crap at producing beers for the deep midwinter. Some breweries think that it is sufficient to produce a sickly, malty beer in the 4 to 5% range and give it a jokey name. I know one pub that orders far too many casks of Christmas beers with the result that they are still on sale in mid-January when no one is slightly interested, the beer already turning to vinegar. Furthermore, it's strange that the so-called 'craft' breweries who are used to producing strong beers don't seem interested in this sector. Presumably, they deem Christmas beers as a bit naff.
Posted by Birkonian at 18:53 2 comments

To Blog or Not To Blog

The trouble with blogging is that you have to blog regularly. Readers expect new content even if they don't think much of what is written. So even when I've been tempted to blog during the last few months at he back of mind I've thought "If I re-start can I continue?" The answer's been 'No' but I thought it was time to make an effort again.

What sustains the beer blogging world is the discussion of 'craft beer'. What it is, what it isn't, where it is found, who likes or doesn't like it and if it even exists. What many bloggers fail to realise is that the vast majority of beer drinkers aren't aware of craft or if they are, don't have the chance to drink it/ignore it in their local pubs - I use the word 'pub' because bars are still mostly found in large cities.

I was out in Liverpool on Friday for my firm's Christmas lunch followed by the obligatory piss up. Now Liverpool has been a little bit slow in grasping the craft mantle. Scousers aren't slow in responding to new trends but they mostly like to drink their beer in pints - low gravity and lots of them. Being a sociable animal I was resigned to being dragged wherever the group took me. I knew the beer would be crap but the company of numerous drunken women was one consolation.

The meal was booked for 2:00 p.m. so there was time for a few drinks in a pub of my choice with a few like minded souls. The Lady of Mann was the choice. near to the restaurant and decent beer. I started with a pint of a hoppy beer from a new Welsh brewery who's name escapes me. Very nice too. I then decided I should try a half of a keg beer which is very much in the craft category. Magic Rock's High Wire was available and the pub enhanced its craft quotient by offering the choice of half pint or schooner. Another excellent beer.

On to the Bar and Grill for food. A slightly upmarket venue where it's not unknown for Premier league footballers and other 'celebrities' to be spotted. No beer of note but the bosses had paid for the wine so no problem.

After the food came the difficult bit. The Slaughterhouse is an iconic pub name in Liverpool, but despite it's resurrection as a comedy venue it no longer has any atmosphere and has no decent beer at all. I even sneaked over the road at one point to neck a half of Greene King IPA in the Cornmarket. Desperate measures.

Next was All Bar One. Not my sort of pub, but surely there will be at least one handpump? Surveying the bar my hopes were dashed but there was consolation. Sierra Nevada Pale Ale amongst the keg fonts. £4.50 a pint is extortionate for Liverpool but beggars can't be choosers.  An hour and a half later to time to move again. 'Matthew Street' is the call. The tacky, drunken touristy centre of Liverpool with it's homage to the Beatles and fake Irish bars. A glimmer of hope though. A few of the pubs/bars stock the odd cask beer. My hopes are dashed again when I realise that the Revolution Vodka Bar is our destination. I'd normally not be seen dead in there but on we must go. But perusing the beer menu I'm mildly surprised. Curious IPA, Duvel and Chimay Bleue are listed. Pretty average apart from Duvel but better than the poxy lagers on draught. Three hours in there and I've seen off the stock of Curious so finish with Duvel. Time to move on is the cry but it's the last train home for me. You can't walk across the Mersey and I don't fancy forking out a fortune for a taxi just to have more beer that I don't need.

The moral? Slowly but surely the rise of craft beer is improving the choice of beer in venues you wouldn't expect to stock anything drinkable.