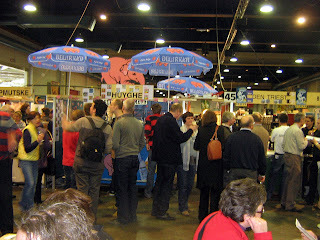 So I'd been to the left field super-cool Alvinne Craft Beer festival. The next day it was off to the more traditional festival in St Niklaas organised by Belgium's beer lovers' consumer organisation Zythos.

﻿A hundred or so Belgian breweries took part, most with at least two beers available, some having half a dozen or so. This is not the place to find rare or special edition beers. It's an occasion to celebrate the bedrock breweries of Belgium that turn out the brews that the rest of the world have learned to appreciate. It's unfortunate that a few of the smaller, forward thinking micros have declined to attend in recent years due to a dispute over the fees for attending.

festival has been held annually since 2004. Previously, O.B.P., the forerunner to Zythos organised the much loved '24 Huur' festival in Antwerp which was held in a steamy, packed out venue with no regard for modern health & safety mores. In those days I could cope with the Saturday 2.00 a.m. finish. Unfortunately, Zythos is now outgrowing this venue too and it can be uncomfortable and difficult to get to some stalls at busy times.


﻿﻿It's ﻿﻿still a good day out though with  blondes, brunes, triples, ambrees, stouts, gueuzes and krieks from all over Belgium. if you look closely you may even find an IPA or two. There's the usual mix of Flemings, Walloons and beery types from all over the world enjoying beers from one of the world's foremost brewing nations. 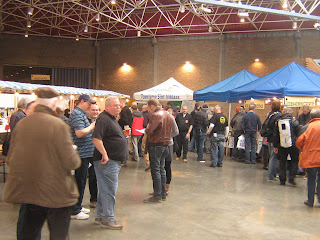