I'd intended to report on a pub crawl yesterday of Huddersfield's excellent pubs. However, the Sportsman  showed total disregard for prospective customers by by disregarding its publised opening time of 11:00 a.m. I gave up waiting at 11:25 and took in a quick pint of Leeds Pale at Wetherspoons (please forgive me) en route to The Grove which opens at noon. 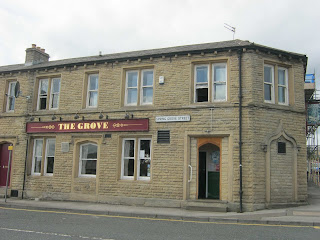 Once inside I realised that it would be very hard to to leave. The cask and craft beer range matches anything found in the trendy metropolis bars. Highlights of the cask range included the new Magic Rock brewery's hoppy, Thornbridge Hall Summer Ale, a collabaration brew from Gadd’s andd the Italian brewery Revelation Cat called Back to Basics Pacific Double IPA (9%) was a very impressive ultra-strong hop bomb. Buxton Moor Top was also very acceptable. Also, the Tim Taylor's lanlord was the best I've tasted in a many a year and reminded me why it was so highly regarded before it appeared it so many pubs round the country that don't really care about beer quality. The beers I've listed are just a smattering of the full range available which you can view here.

I tried a number of craft beers as well: Beer Here Dark Hops IPA (), Nøgne Ø Pale Ale (), Flying Dog Raging Bitch (USA) and Brewdog’s Hardcore IPA. I didn’t get round the De Molen’s Op & Top () but there will be other opportunities during my trips to .