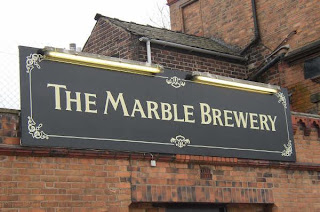 That's how much a bottle of Marble Brewer Barley Wine costs from the Marble Beer House. It is 10.7% and is presented in a 75ml champage-corked bottle but even so is it value for money? I think not.

Perhaps Marble are starting to take their customers for granted. I did buy a bottle of Old Manchester to take away but £8.50 isn't enough for the staff to provide a bag to put it in. Also, I went to order food at the bar but was told that meals were suspended for an hour. An hour later there was still no timescale for ordering foood and when I enquired why I was told that the staff were busy catering for two pre-booked parties in the restaurant. In other words the ordinary customer could starve or in my case go elsewhere. I will say that the draught beer was as superb as ever.
Posted by Birkonian at 15:09