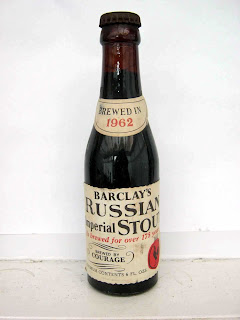 One of the great bottle conditioned beers that was available at the dawning of CAMRA, Courage Imperial Russian Stout was 10% a.b.v. and brewed from a combination of pale amber and black malt plus unusually, a small amount of Pilsner malt. It was heavily hopped with Target hops and had a very intense and bitter chocolate taste with a smooth texture. 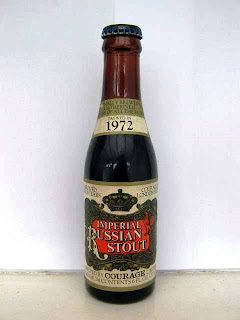 In the 18th Century Thrale’s Anchor Brewery in Southwark was one of the premier exporters of Stouts and Porters to the Baltic. The brewery was eventually sold to a banker named Barclay whose name is still used by the bank today. Another banker named Perkins joined forces and they became one the major brewers in . 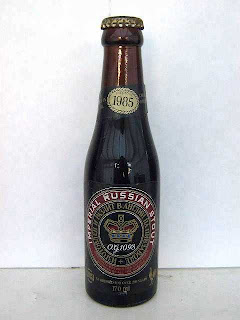 The brewery was taken over by Courage in 1955 and closed with production and brewery name moving to the Courage site nearby. The Barclay Perkins name continued in use until the early 1970s. Imperial Russian Stout was matured in wooden pins for one year before bottling.
The Courage brewery in closed in the 1980s with brewing of Imperial Russian Stout moved to John Smith’s at Tadcaster. However the beer was no longer matured and it was released young. It was no surprise when production ceased in 1993.
Posted by Birkonian at 22:24