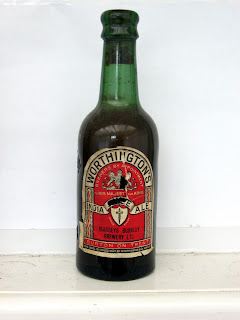 Baron Orm requested that I publish a photo of this old bottle of Worthington beer of mine. I was told that it dates from the late 1920's although I haven't been able to verify if the Royal Coat of Arms on the bottle is that of Goerge V or George VI.

'Brewers By Appointment To His Majesty The King' the label proudly proclaims. It will be a familiar sight to many older drinkers, being very similar to that used for Worthington White Shield until comparatively modern times. The name 'Masseys Burnley' indicates where it was bottled. Massey's was taken over by Charrington United in 1966.  Embossed on the reverse is 'J. Grimshaw Ltd. Burnley.' The latter brewery was itself taken over by Massey's in 1928 so the bottle is well over 80 years old.

The bottle is cork drive and there has been little evaporation over the years althoug the beer appears to be hazy. I have another bottle from this batch so I think I'll sample one during the OpenIt! weekend and let you know if it is drinkable.
Posted by Birkonian at 18:57