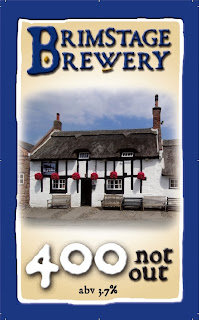 Brimstage Brewery launched their new '400 Not Out' beer this week. brewed to mark the 400 years existence of the Wheatsheaf pub in Raby, a top seller of Brimstage beers. It is a traditional 3.7% brown bitter brewed with Maris Otter, Crystal and pale malts with Fuggles and Goldings hops. There is a distinct coffee nose, and the full flavoured tasty bitter suggests a beer of a higher strength. 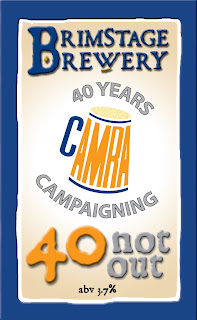 Some of the brew will be sold in other pubs where it is badged as '40 Not Out' to recognise CAMRA's 40 years of campaigning. Outlets include O.C./Knockaloe, Brombrough; Red Lion, Parkgate; White Lion, West Kirby; Cheshire Cheese, Wallasey and Roscoe Head, Liverpoool.

The beer has been very well received to date and is selling fast so may well become a permanent addition to the range.
Posted by Birkonian at 16:02