The future is keg!

As we all fall headlong into the bottomless pit of 'Nu Keg' as I and no one else likes to call it, I came across an image of a previous keg beer that was supposed to sweep all before it. I'm willing to be contradicted but I think it was only trialled in the North of England. You Southerners don't know how lucky you are. 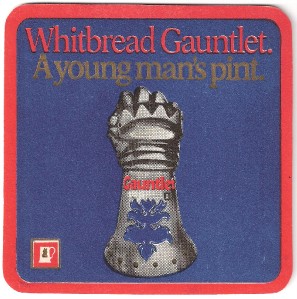 I hadn't yet heard of CAMRA and this was new and 'trendy'. My Dad's pub sold it and Whitbread threw lots of money at an advertising campaign. It was a 'Young Man's Pint' and had a ridiculous tin gauntlet dispensing unit. Today's ASA would have a hissy fit. I used to drink it pre-match at the Prenton Hotel next to Tranmere's ground. It was dark, sweet and probably crap. After a few months it just disappeared without trace never to be mentioned again. Until now.
Posted by Birkonian at 22:37