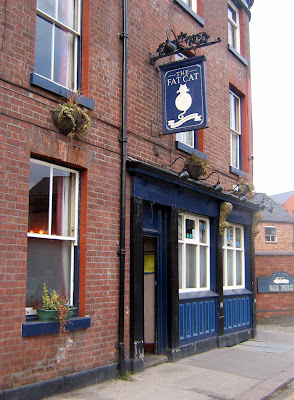 Leaving the Hillsborough Hotel two stops on the tram will take you to . Keeping left, and crossing the dual carriageway I had reached the district. This is an area of empty streets with any number of decaying factories and warehouses. The rehearsal scenes in the Full Monty could have been filmed here. A stranger would not expect this to be fertile territory for good beer but they would be very wrong. My first port of call was the Fat Cat. Again it is nothing special externally, but inside it is a compact and thriving pub which sells and excellent range of beers from all over the country and also those from its own brewery. I settled down in front of the real fire with a pint of Sarah Hughes’ Ruby Mild.
﻿
﻿﻿﻿﻿﻿﻿﻿﻿﻿﻿﻿﻿﻿﻿
﻿﻿﻿ ﻿﻿ All was well with the word. I promised a special ‘Hello’ to Simon from Kendal who was celebrating his 23rd birthday with a few friends. It’s good to see a younger generation appreciating our classic pubs.
I furthered his beer education with a bottle of Gouden Carolus Xmas which was well received.
Time was passing so it was time for the next pub. Just a five minute walk away was the multi-award winning Kelham Island Tavern. To be brutally honest I’m surprised that it won CAMRA’s highest award two years running. Internally it is nothing out of the ordinary with a comfortable bar and a newer conservatory which has increased capacity considerably. That’s not to belittle the pub, I just think that there are other gems somewhere else in the country that would give it a run for its money. I will say that it is a very friendly and well-run pub that I’d love to have as my local. 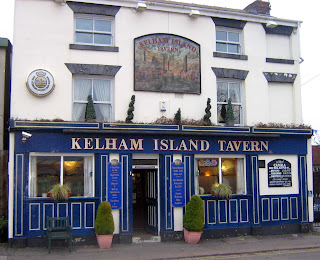 The licensee takes great pride in choosing and cellaring his beers so that they are served in optimum condition. I opted for one my favourite session beers, Acorn Barnsley Bitter which is designated as the house beer at a very reasonable price. This is an old fashioned ruby coloured beer with a good balance of malt and hops. it's a long time ago but my recollection is that the original Barnsely Bitter wasn't quite so dark in colour. Anyway, a welcome change from the plethora of hop-head beers that have flooded the market in recent years. 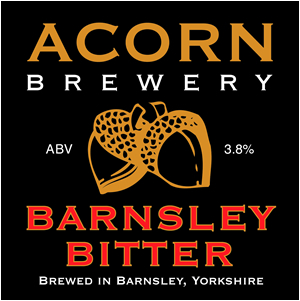 Final stop was the new Sheffield Tap, but I’ll dedicate that one a blog of its own.
﻿
﻿
﻿
Posted by Birkonian at 19:07