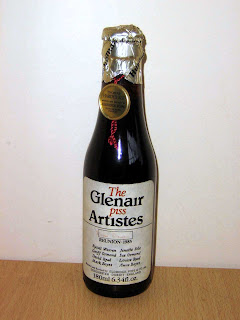 Thomas Hardy's Ale was advertised for many years as the 'Rarest Beer in Britain'. It's highly unlikely that this proclamation was ever true for the yearly vintages. Many thousands of bottles were produced each year and even as sales dwindled they would be in excess of those from the upstart micros.

However, Eldridge Pope did produce one edition in 1985 that was limited to about 12 bottles only as far as I know. I don't know who the Glenair P*ss Artistes were although their names are listed on the label. I believe that one of them may have been employed at Eldridge Pope and was able to convince the brewery hierarchy to re-badge a few bottles of their flagship ale. Anyway, I've got one bottle!
Posted by Birkonian at 17:11