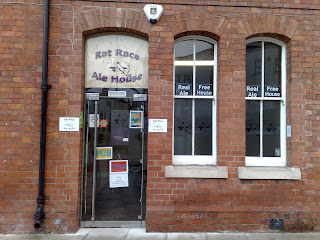 The Independent ran an article on Micropubs last week. The Licensing Act of 2003 made it much easier to open a pub than was the case previously when big brewers or pubcos would object as a matter of routine. Now if you prove compliance with health & safety, law and order, protection of children and are a fit and proper person you get your license.

Buying and existing pub is expensive and so are the running costs. These new Micropubs are small and basic and occupy premises that have been converted from other use. They concentrate on beer and won't have room for fruit machines or food. Now that's all very good but if we're making the effort to go out for the evening why go to something no bigger than your average living room? After all it's cheaper to buy some decent bottled beers and drink at home.

I've been to the Rat Race, a micropub based in a room at Hartlepool Railway Station that was previously a  waiting room, a taxi company office and a newsagent. Now it sells an excellent range of cask beer and is in the current Good Beer Guide but I found it unappealing and gloomy. In essence it was a plain rectangular room with no visible bar. What appeared to be a store room in one corner included a stable door from which the beer was provided. The lack of a bar as a focal point was probably the thing that detracted most from the experience. No pumpclips, spirits or staff to look at. No toilets either, customers have to use the facilities in the railway station. I wish the venture good luck but I prefer something a bit more atmospheric.
Posted by Birkonian at 22:47